Peruvian Culture and The Perfect Peruvian Adventure with Belmond

Explore every facet of Peruvian Life with Belmond. 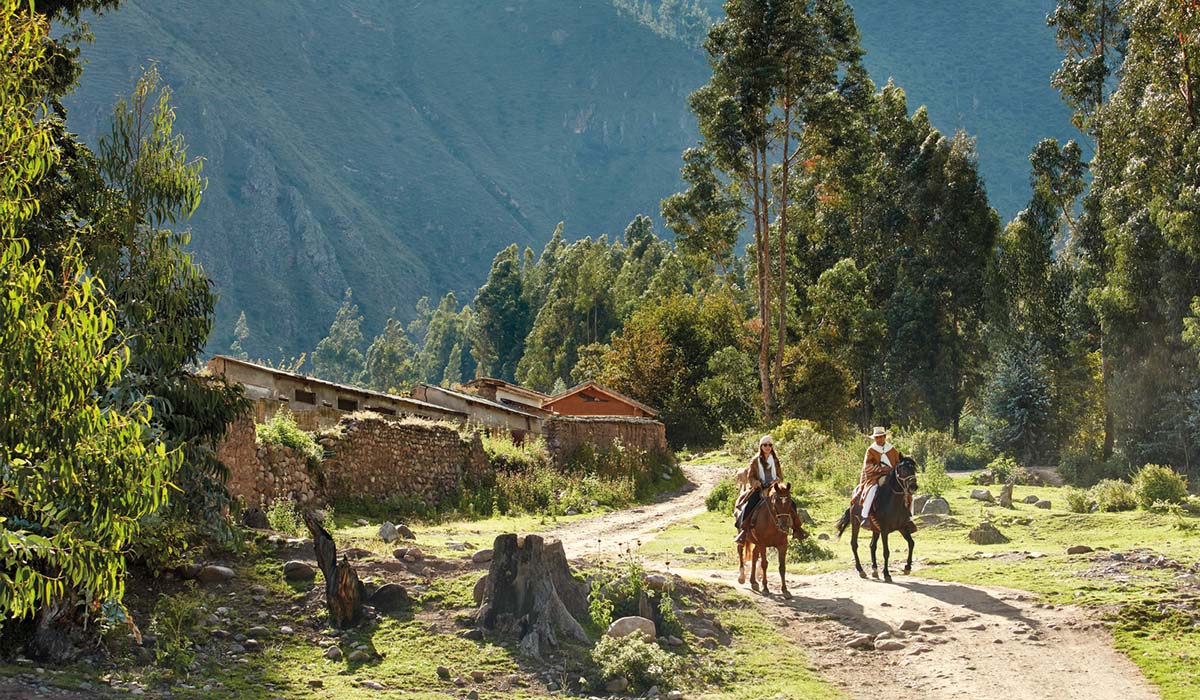 The Inca Empire flourished from 1438 until 1533 however the Incas were considered a tribe from 1200 to 1438. They had an absolute monarchy with an emperor decided by inheritance and the empire had no monetary system. The Incan economy was driven by different jobs that rotated seasonally. The culture was polytheistic and had a huge emphasis on architecture. Peru still has many examples of traditional Incan architecture however, Machu Picchu is the largest and best maintained. This combination of colonization and the cultural strength of the Incan people has created a unique country with rich culture and history.

The Spanish Empire first encountered the Incans 500 years ago and has progressively assimilated.  During the conquest, people were forcefully converted to catholicism through the implementation of the Spanish inquisition. The Inquisition employed torture to make sure new converts did not stray from catholic beliefs, however many indigenous people died due to European diseases. Ultimately the Spaniards imported slaves in order to secure Peruvian exports. 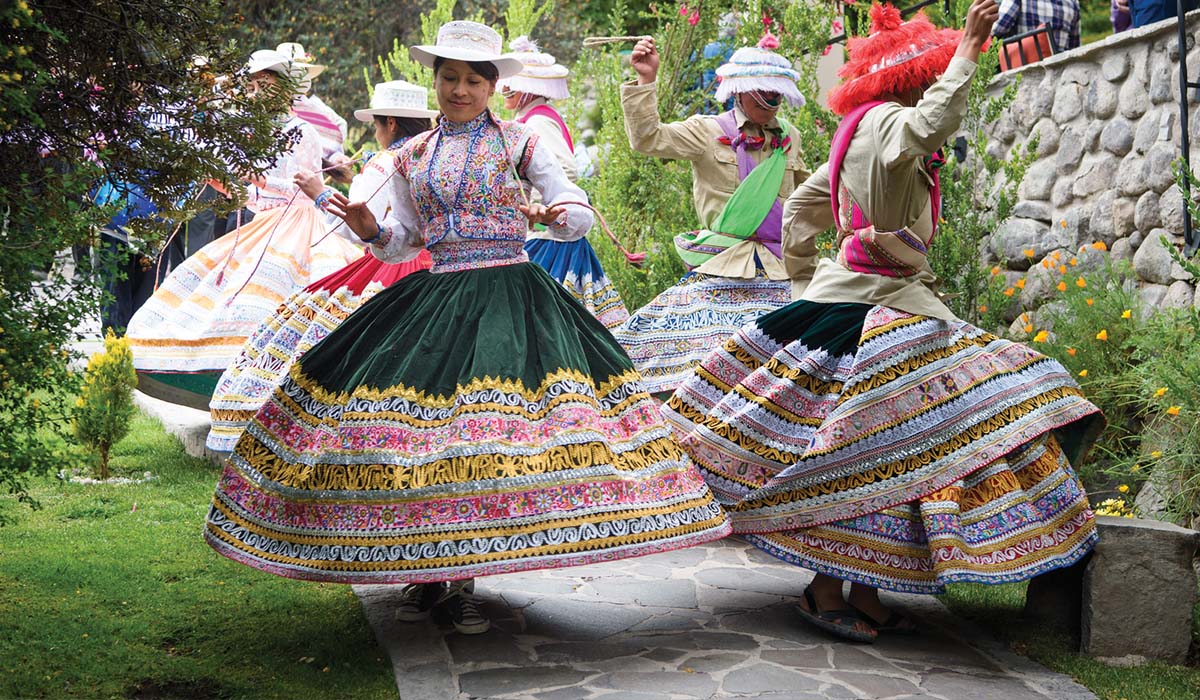 Hotels and other travel businesses generally speak English however, the official language of Peru is Spanish. Many Peruvians still speak Quechua, the official language of the Incan empire in the 1400s. While the locals do not expect visitors to learn Quechuan greetings, Peruvian culture places an emphasis on courtesy and learning good morning (Buenos Dias,) good afternoon (Buenas Tarde), or good evening (Buenas Noches) will go a long way. If travelers plan to visit the Andes, they will experience much more Quechua and Incan culture. 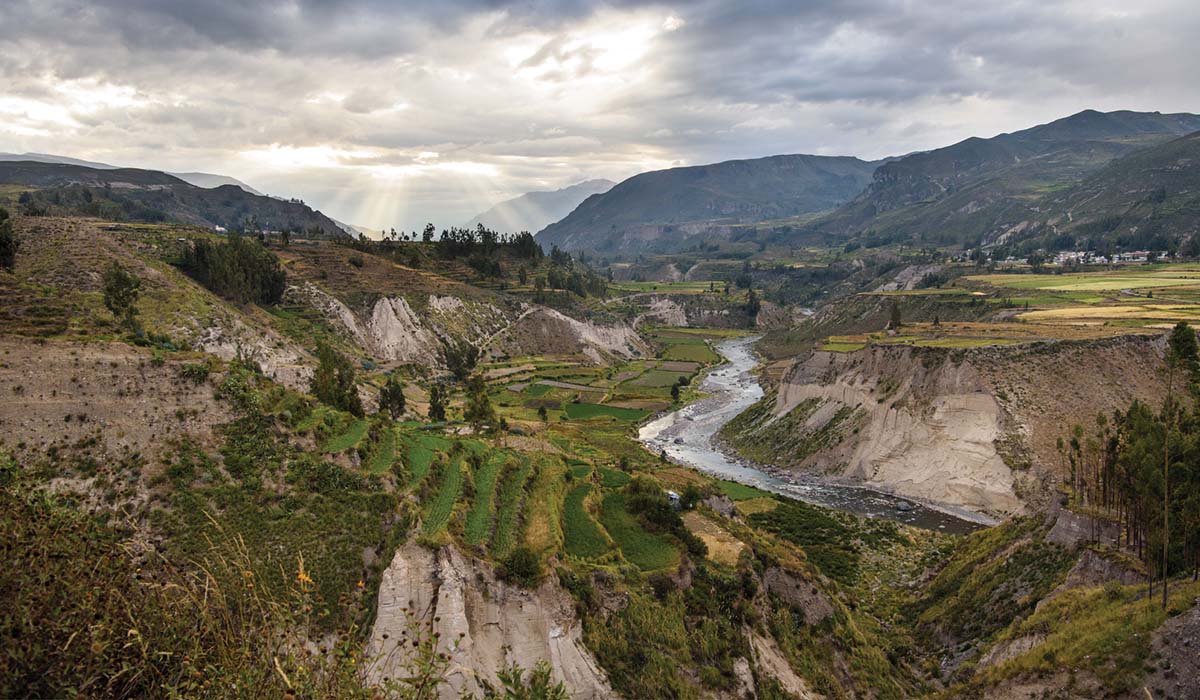 The Incan culture continues to flourish in the hidden corners of Peruvian geography. Due to the mountainous terrain and high altitude, many small districts surrounding Cusco and throughout the Andes have a huge Incan influence.

These areas typically speak both Quechua and Spanish. This is because the areas were never colonialized or were rarely frequented by the Spanish due to their stepped paths. While Incan llamas could easily navigate the small paths and survive the thin air, large Spanish horses did not do well in the Andes. 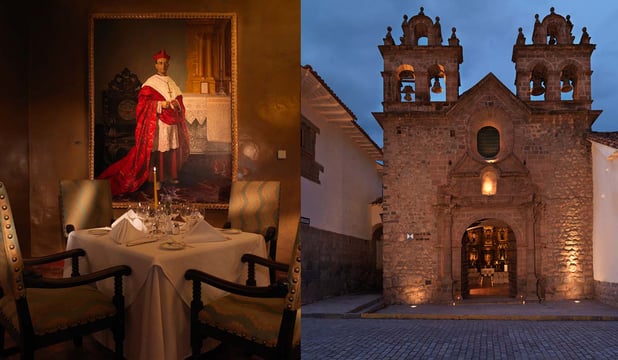 Faith is still very prominent in Peru and in the last 30 years a population of other Christian faiths has become increasingly common. Roman Catholic groups have defined laws to preserve religious tolerance and freedom, whereas some evangelical groups have come to discourage traditional practices with the imposition of lifestyle norms and styles of dress. 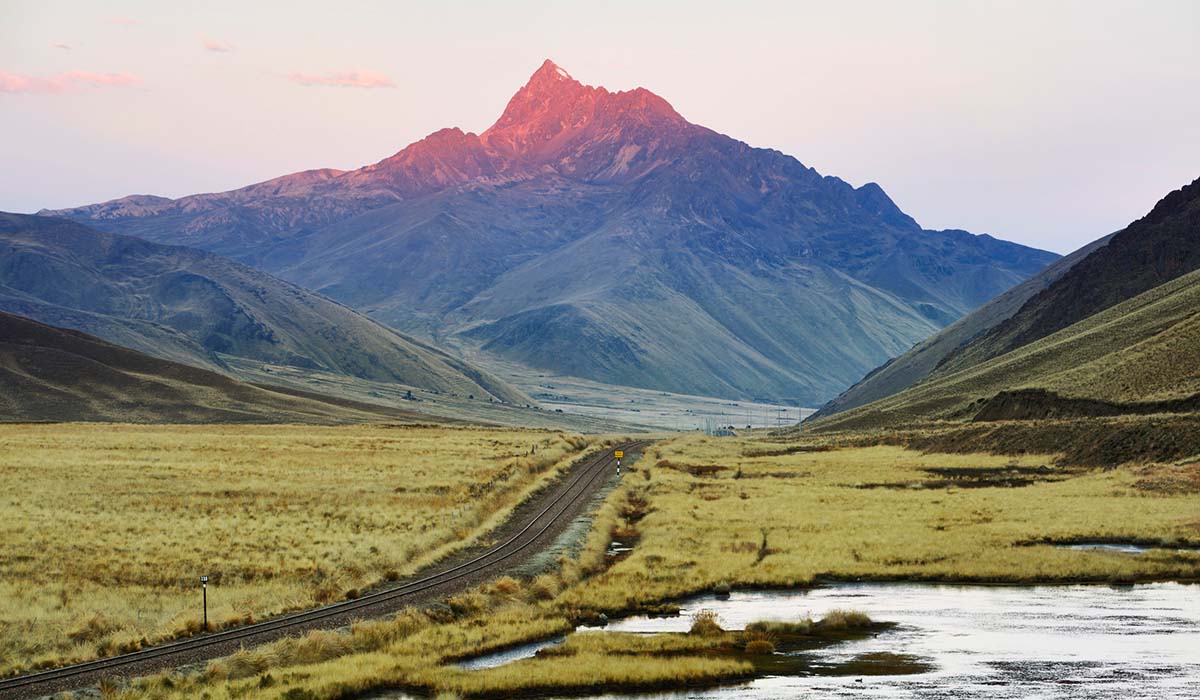 The Perfect Peruvian Adventure With Belmond.

For the perfect trip through Peru, travelers can fly to Arequipa to board Belmond's Andean Explorer. Once aboard the iconic sleeper train will take you to Puno, then Cusco. On your first night in Cusco explore the city with a stay at Palacio Nazarenas, then spend a night at Monasterio to learn all about Peruvian religion. In the morning board the Hiram Bingam to Sanctuary Lodge at the base of Manchu Picchu. After a few days of hiking the mountainous Manchu Picchu, drive to Sacred Valley for a few days of relaxation at Rio Sagrado. Eager to see more? Add a day at Miraflores Park in Lima before boarding an international flight or check out Peruvian nature with Las Casitas in Colca Canyon.

Revisit history aboard this high-altitude train and travel between Peru's natural wonders and ancient kingdoms. This luxury sleeper train glides from Cusco across the loft Andean plains to Arequipa. Enjoy Lake Titicaca and Colca Canyon along the way. 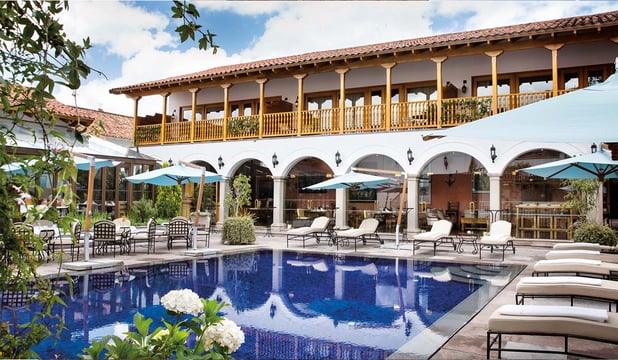 Uncover the secrets of Cusco with a stay in one of its most cherished landmarks. Moments from Plaza de Armas is an ancient monastery that has been at the heart of the city for centuries. Dine by candlelight among the cloisters; explore interiors rich with art and antiques; uncover the secrets of Peru’s national drink with a pisco lesson. Monasterio is a true jewel in the treasure trove of Cusco. 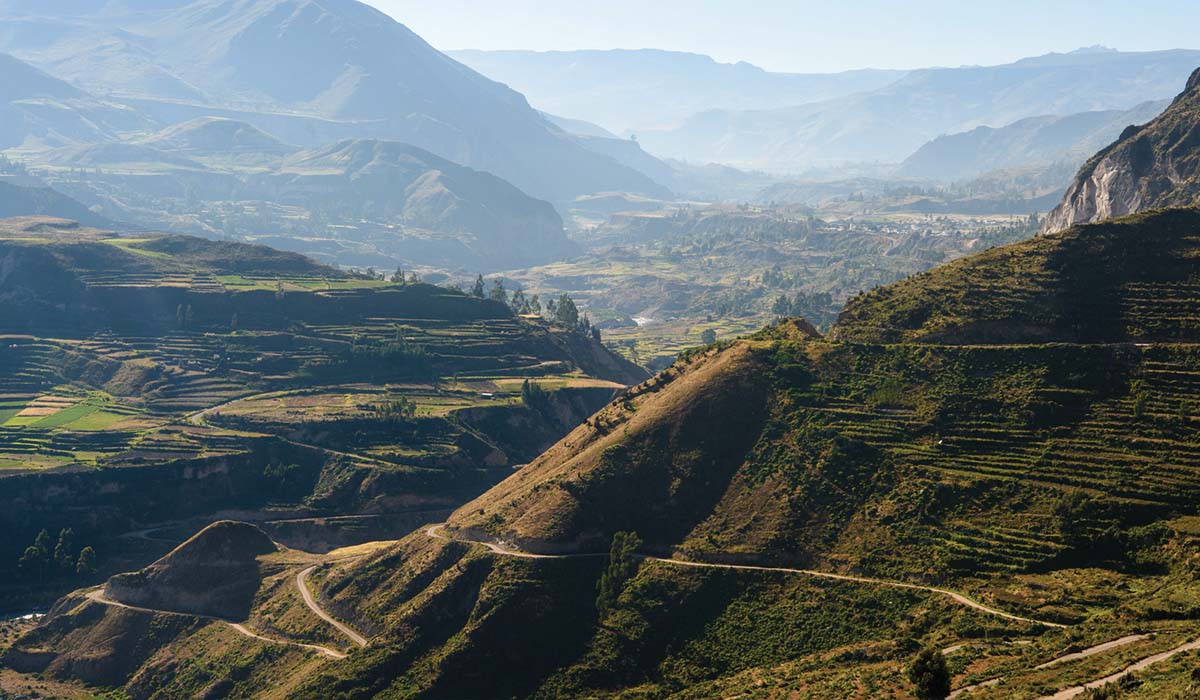 Sanctuary Lodge is the only hotel located next to the mystifying Inca citadel. As the only Machu Picchu hotel, you’ll be perfectly positioned to feel the heartbeat of this ancient wonder. Sit out on the terrace and savor Peruvian cuisine based on produce grown on the Lodge’s own plot. This delightful hideaway is the ideal place to relax after a day packed with adventure. 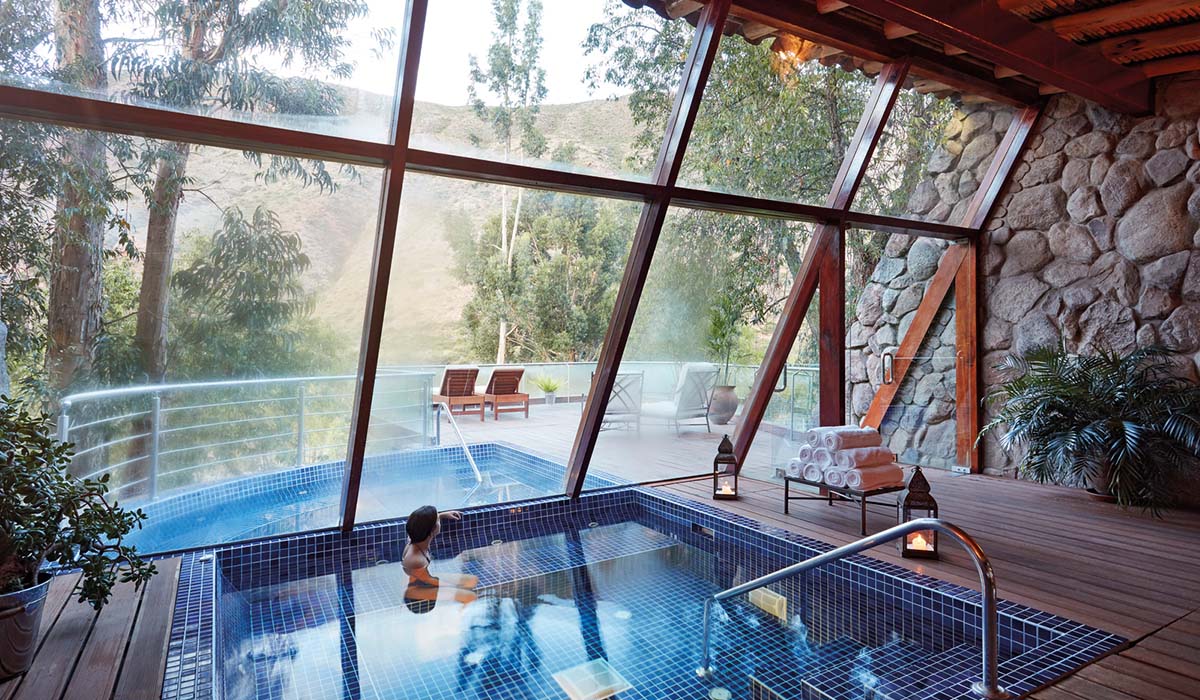 Built to resemble a rural Peruvian village, Rio Sagrado is one of the most unique luxury hotels in Peru. A stay here lets you experience the majesty of life in the mountains. Situated at a lower altitude than nearby Cusco, the hotel provides the perfect environment in which to acclimatize and is an ideal base to explore the Sacred Valley and Machu Picchu. Savor sensational cuisine in the restaurant, enjoy a local Sacred Valley massage or spend a few soothing minutes feeding the hotel's baby alpacas. 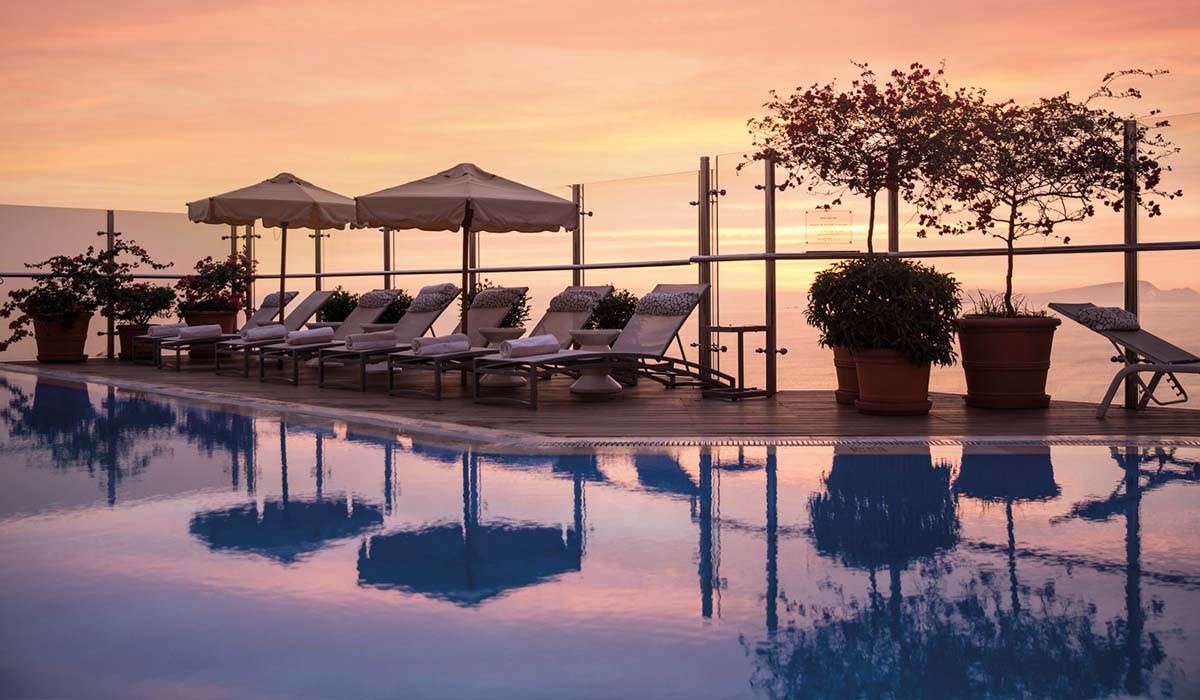 Live the high life in Lima’s hottest district. Set in a verdant garden, Miraflores Park is a true urban sanctuary beside the city's cultural gems. Miraflores Park is destined to impress. Unwind in Zest Spa, or put in some extra work hours in your sophisticated Suite. Come evening, ascend to the rooftop pool for a sunset dip. The ocean views will take your breath away. 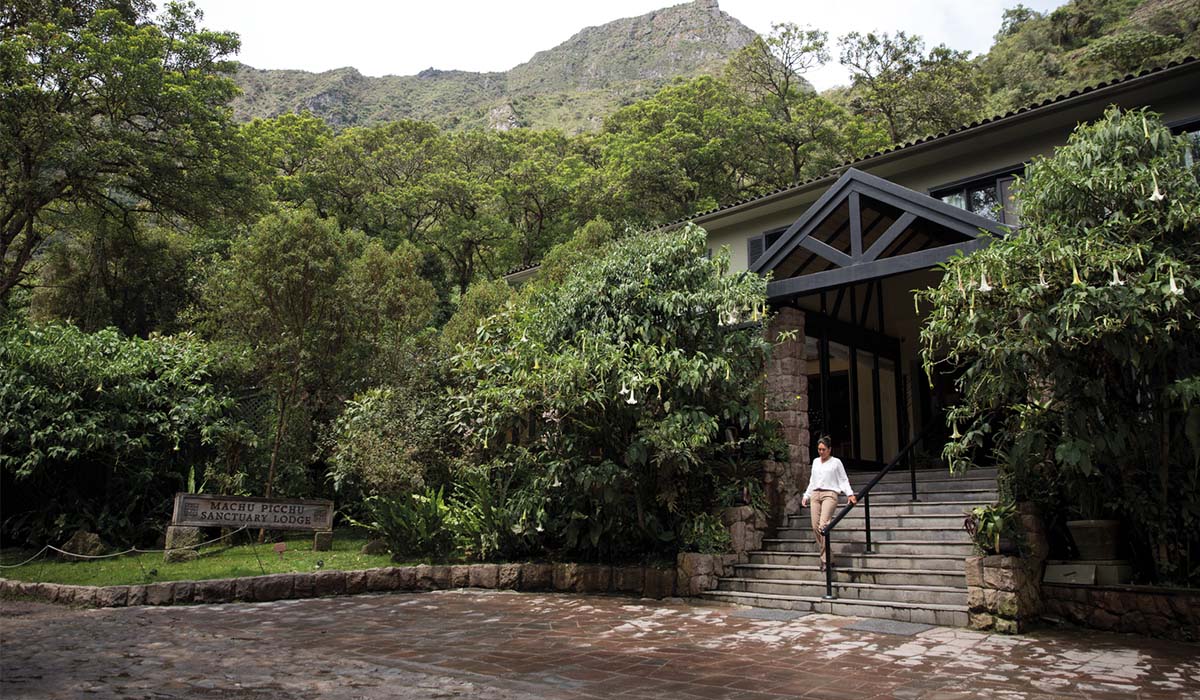 The hidden gem of the Andes. Retreat to a world of quiet indulgence, surrounded by the peace and serenity of the breathtaking Colca Valley. This secluded hideaway and spa offer a rare opportunity to experience the traditional beauty of Peru. Slip into a gentle pace of life as you spend time in harmony with the astounding nature and warm local communities of this lush valley. Time is yours to savor, with complete freedom to do as much or as little as you wish. 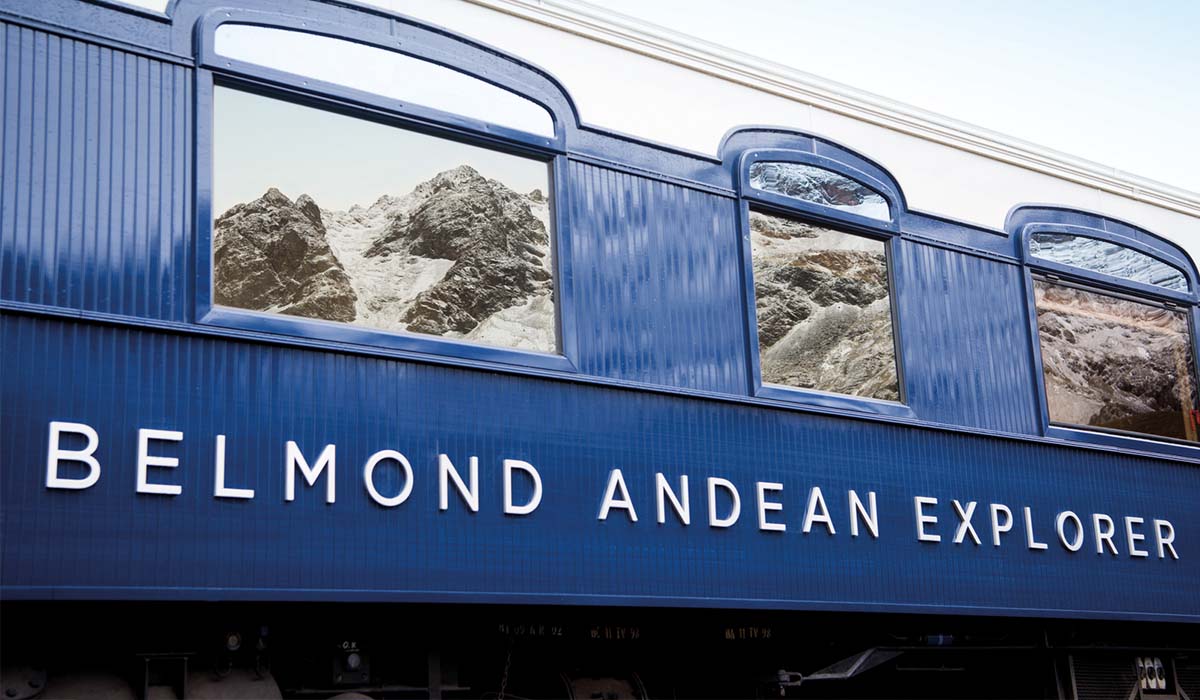 Belmond joined LVMH Moët Hennessy Louis Vuitton in April 2019, reinforcing their place among the international leaders in luxury. For over 40 years Belmond has followed the pioneering spirit and passion for authenticity to create and uncover some of the world’s greatest travel adventures. Today, the Belmond collection includes one-of-a-kind hotels, trains, river cruises, and safari lodges in stunning destinations across the globe. Each has an incredible story to tell.

The invitation-only Bellini Club gives access to generous rewards, as well as exclusive tools and resources and key contacts at Belmond properties across the globe. From priority status to dedicated Bellini Club Concierge, the Bellini Club is the cherry on top for Belmond. 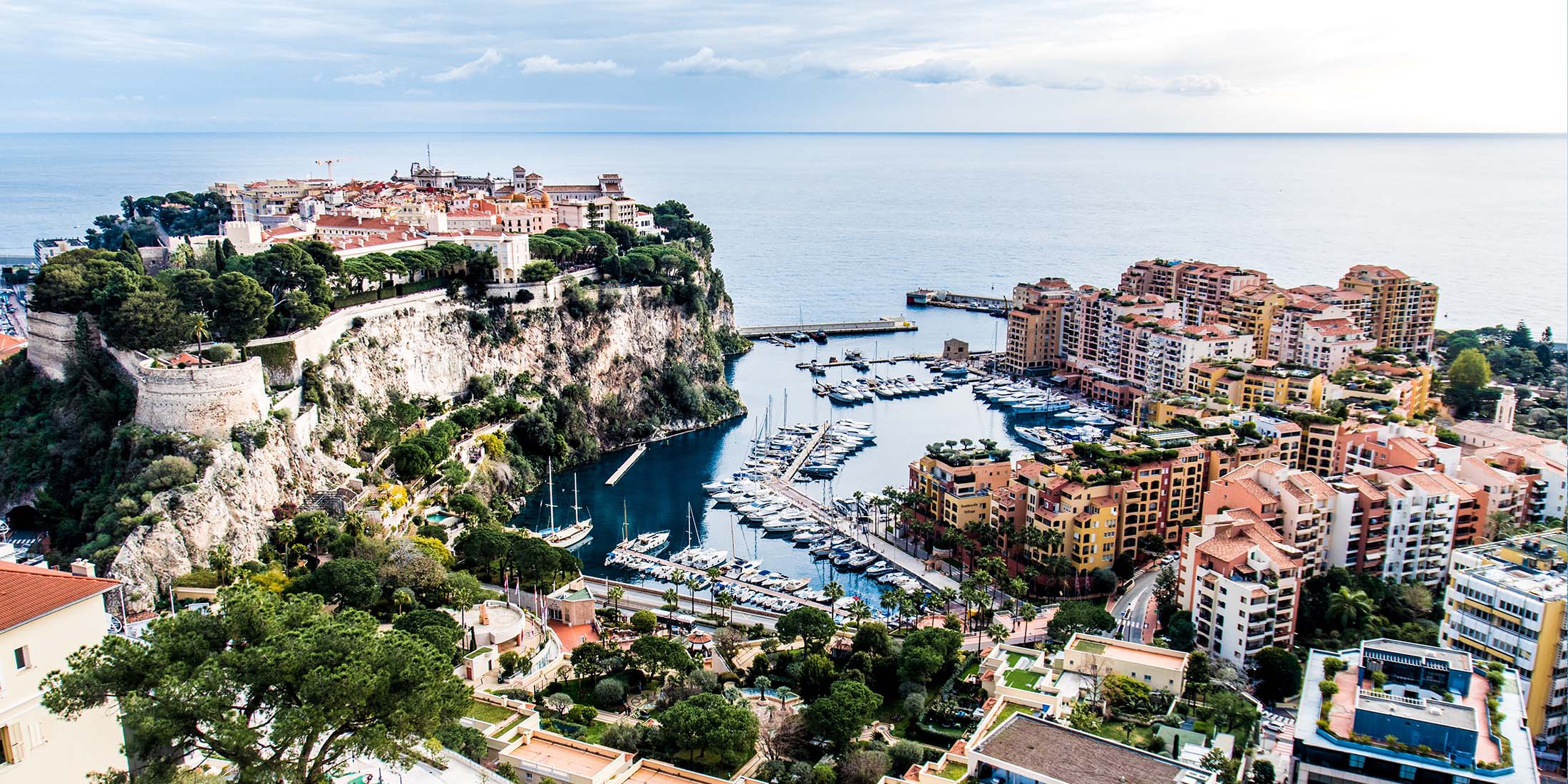 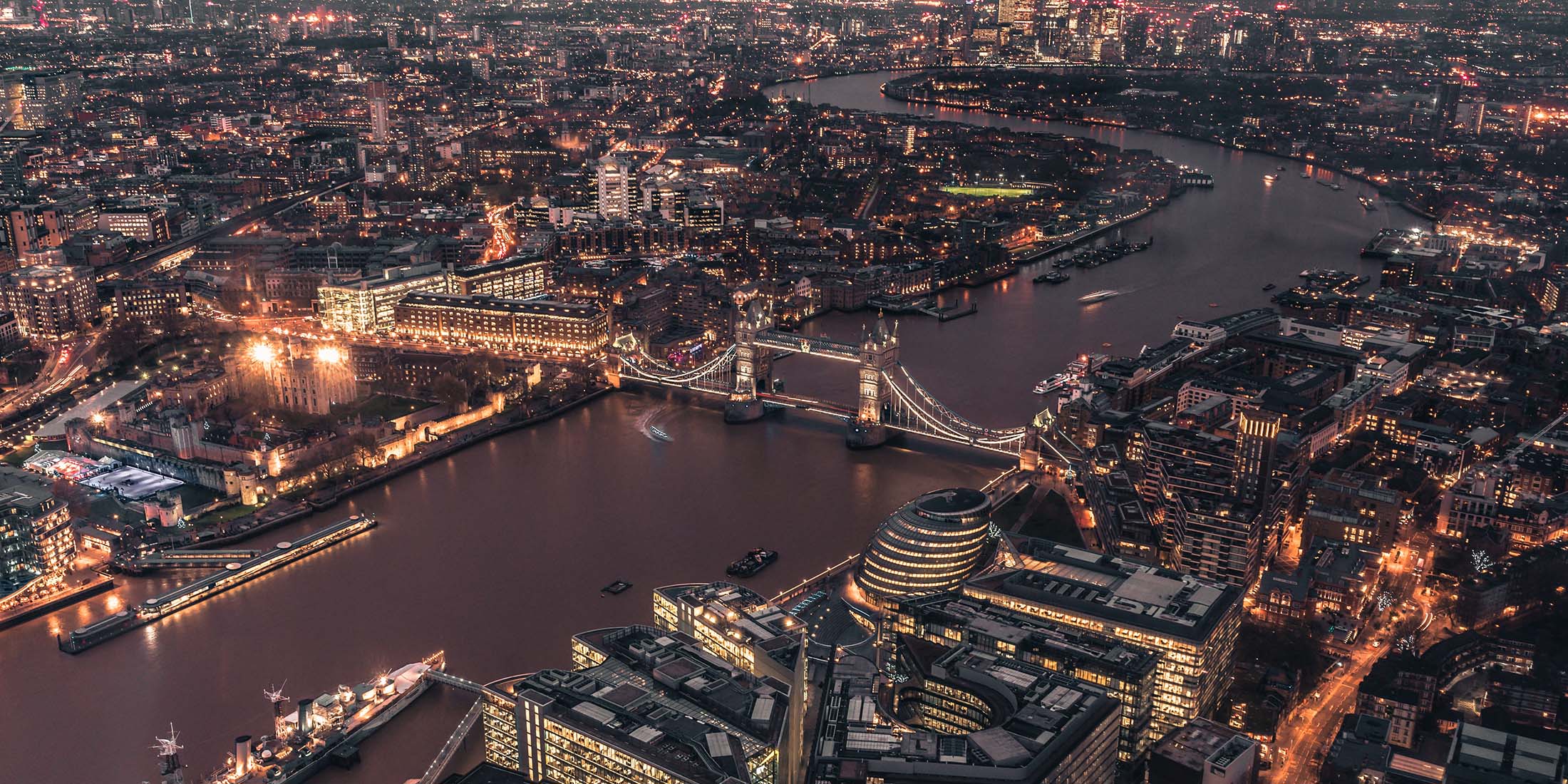 London for every type of Traveler 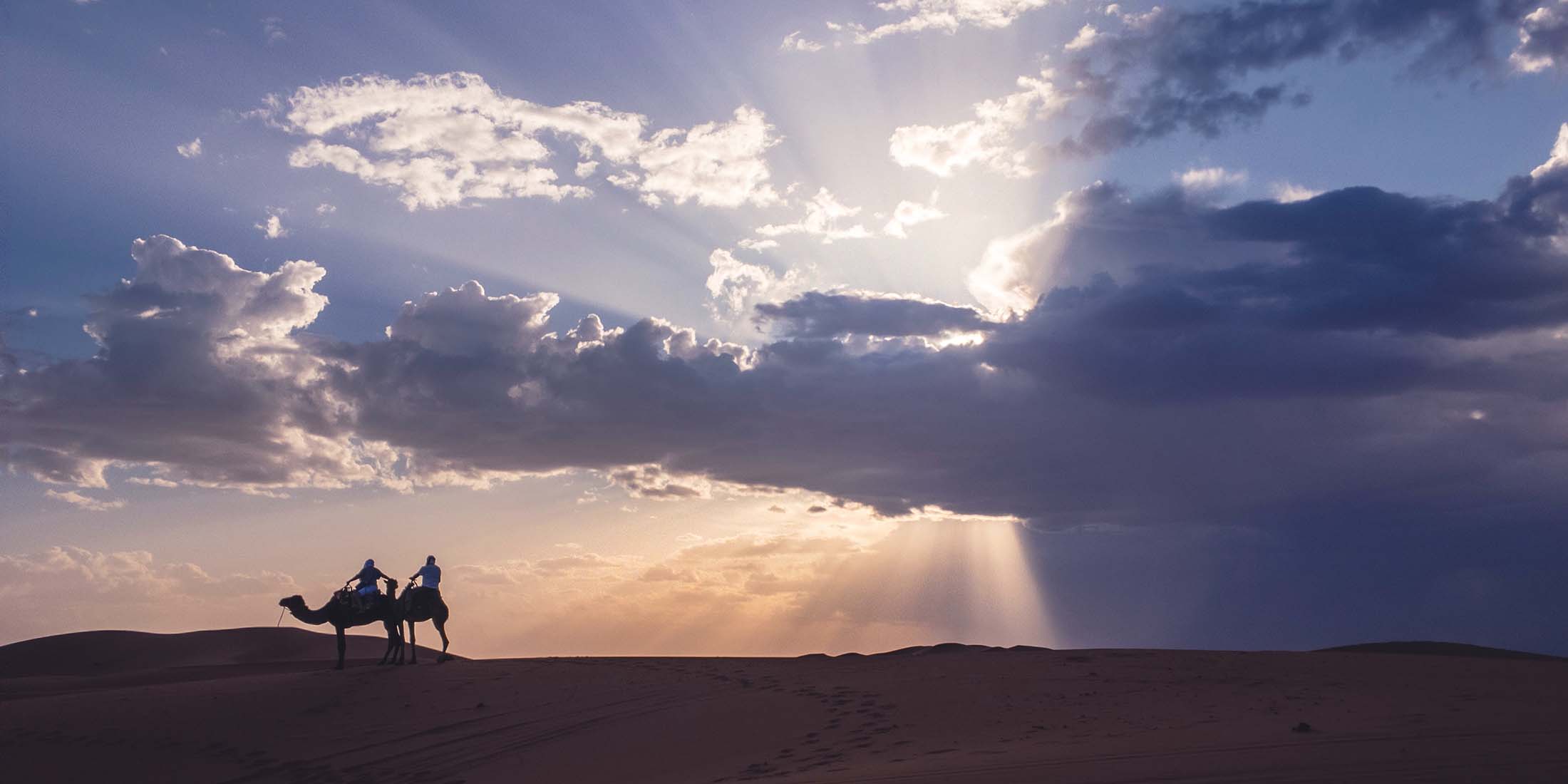